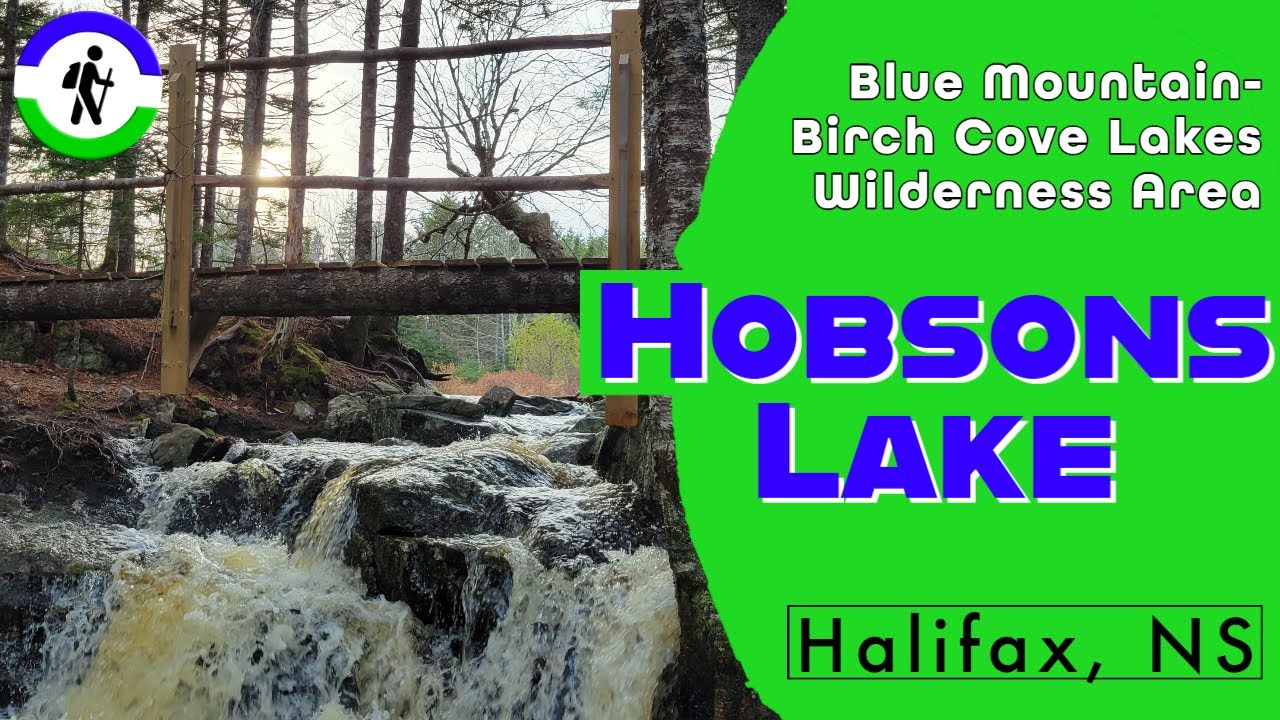 Hobson’s Lake trail is a 5.2km loop that skirts along 3 lakes in Halifax’s Blue Mountain-Birch Cove Lakes Wilderness Area.  First is Hobson’s lake, then Ash Lake followed by Fox Lake.  Publicly Accessible via the end of a cul-de-sac on Colins Road, often crowded at peak times due to the limited nature of parking at the end of a cul-de-sac.  Good public access points to the Blue Mountain-Birch Cove Lakes Wilderness Area, thus far, are non-existent due to its enduring state of purgatory.

The nearest parking is via the end of Colins Road. This quiet cul-de-sac has limited parking and can often be overflowing with cars during peak times.  For a period of time, the NS government forced Maskwa to disallow access, making Colins Rd. even busier.  Make sure not to block driveways, keep noise levels to a minimum, and pack out what you pack in as there is no garbage collection.

Another parking & access point to this area is via a large gravel parking area adjacent to Maskwa Aquatic Club.  This land is leased by Maskwa and it’s due to their kindness that you can park here.  Their land is leased purely for the purpose of running a paddling club and they do not maintain the trailhead or have anything to do with people hiking here.  Do Maskwa a favour in return by packing out what you pack in.  Do not use Maskwa’s designated parking or block access to their property in any way.  Keep in mind that the drive into Maskwa passes by a municipal beach and playground with children running around.  Saskatoon drive is a quiet neighbourhood with children, so keep speeds very low on your way in and out from Kearney Lake Road.

Both access points are equally fine starting points to explore this area should one be overly full of cars.  Until this wilderness park comes to fruition, access will continue to be limited.  The jumble of trails can’t be improved until the park is created from its current patchwork of land ownership, so be sure to keep the pressure on our local governments to fulfil their decades-long promise to create it.  The best way to do so is to become a (free) member of the Friends Of Blue Mountain-Birch Cove Lakes Wilderness Society. There are a couple of small maps posted along the way but the trail is not marked.  There are many paths throughout this area so paying attention to where you are going is a must.  That being said, it is pretty easy to stay on track if you do so.  There are some wilderness area signs, orange marks on trees, footbridges and other trail indicators scattered throughout.  The trails are well defined, so you should never be bushwacking or heading into places it seems people haven’t been before you.

The start and end of the trail are uphill and downhill respectively but the rest of the trail is less hilly. Granite boulders dominate the area, as well as old-growth trees and moss, giving it a “Lord Of The Rings” feel.

As you reach Hobson’s Lake, the smallest of the 3 lakes, you’ll come to a footbridge.  The bridge crosses a small brook leading from the lake and continues toward Kearney Lake.  The brook’s waterfall varies in intensity as water levels fluctuate, typically a torrent in Spring, and a trickle in late Summer.  Overlooking this area is an elevated granite lookoff with a view of the lake.  Reachable with a steep, short climb, it’s worth a visit along the way.

Ash Lake, the largest of the 3 lakes, is next, and the trail just skims by the head of the lake.  There is a great stopping point along the trail at the head of the lake.  Be warned that this spot is often accompanied by a stiff wind.  The low-lying parts of the trail near Ash lake can be very muddy with tricky footing.  Use caution on the slippery logs which lay over some muddy parts.  Waterproof hiking boots are often a must.

A short distance later you’ll arrive at Fox Lake, which is an ideal spot to stop to recharge.  There are a couple of different paths leading to Fox Lake so pay attention to where you’re headed, and aim for the granite shoreline.

The last leg of the trip connects to the Fox Lake trail and from there you can head a few different ways (see map).  If you’re headed to Colins Rd, it’s fairly simple to get back if you just stay to the left.

The trail is one of the most beautiful untouched nature trails in Halifax in my opinion.  Though it can be an easy hike done in less than an hour (up & back to Hobsons Lake), it’s not a trail for beginners.  The rugged terrain and navigation issues aren’t something you want to jump into without prior experience on similar wilderness trails.

Bugs can be bad in Spring so prepare accordingly and always check for ticks any time temperatures are above zero.

Neither plant nor animal, mushrooms are in fungi kingdom. Living off decaying material, fungi return nutrients to the soil. Scarlet Wax Cap, is one of two waxy cap groups. More common than other waxy caps, habitat declining so allow the fungi to grow. #mushlove #mushroom🍄 #disc