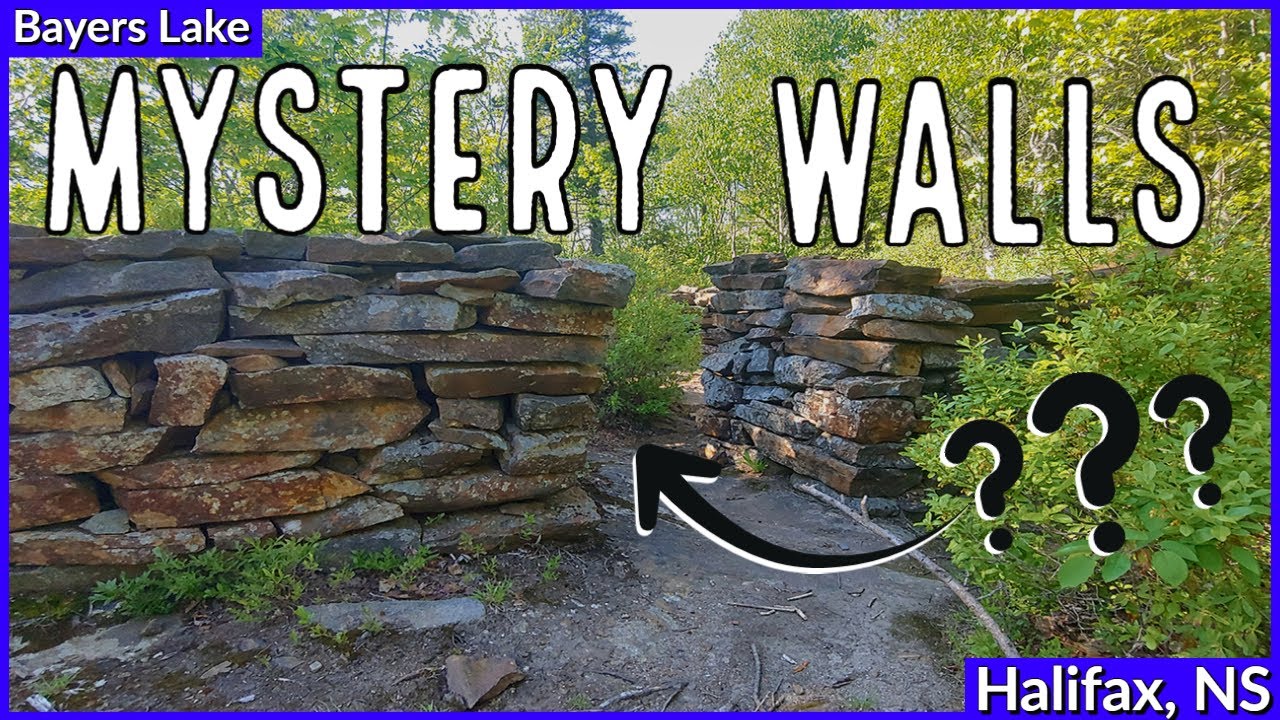 The Bayers Lake Mystery walls are… a mystery.  Educated guesses say they were likely built during the early settlement of Halifax, in the late 1700s or early 1800s.  Plausible theories regarding their origins include a defensive structure for the back end of Halifax, a military supply depot, a training ground for the siege of Fortress Louisbourg, or most recently; a sheep pen.  With every inconclusive theory, the mystery deepens and the lore grows.  Was it a Viking outpost, a Templar stronghold, or Captain Kid’s cottage?  For now, its origins are limited to your own imagination.

When you visit, you’ll see for yourself that the area is a high viewpoint of the surrounding area.  You’ll ponder your own theories, revised and amended with every step you take.  The 5 sided structure is the first mystery presented to you.  This foundation is a mystery within a mystery with its odd design.  The interior has what looks like a fireplace until you consider that there is no opening to this enclosed square.

Was this a sheep pen? Ammunition storage? A private dwelling? To further add to the mystery, archeology studies have found no evidence to back any of these theories.  There’s no evidence of fire within the structure, an x-ray fluorescence analyzer produced no evidence of animals on-site, and no artifacts have been found to help date it.  We don’t have any evidentiary hints as to its creators or its purpose.

Saint Mary’s University has created a super-cool 3D model of this structure, which gives you a better feel for its odd design.  A sheep pen? I’m not so sure, especially when you explore the entire site and get a feel for the overall topography, which I think is ill-suited for farming and agriculture.  Academics have posited some hypotheses, but to date, there is no evidence to back them.

What’s most remarkable with the archeological investigations thus far is the lack of findings. There have been no animal bones or human-made artifacts found beyond a couple of shell casings, cans, and broken glass.  Soil tests haven’t shown any evidence of animal husbandry, and meticulous British bookkeeping would likely have mentioned a defensive structure of this significance. What do you think it is? Leave a comment below with your theory.

Further down you come to the roughly 3 foot high walls which stretch for about 200m.  Higher up you’ll see some natural high points and large boulders.  Stone stairs and a mysterious firepit-like structure are built at the foot of one such area.  The stairs lead to an area with a large boulder perched atop an elevated rocky area.  Was this boulder the reason for the stairs?

All you need to do is stand on one of the elevated rocky areas to take in the view and you’ll see why it may have been considered a geographically significant location.  Throughout your exploration, you’ll be confronted with more questions. Just when you think you may have figured out who, what, when, where, or why, you’ll come across something that adds to the mystery.  One important aspect of the mystery is to consider that the British kept records of almost everything built in Halifax, especially anything of importance to the colony.  Oddly, there are no records of this large emplacement in any historical records.

Everyone loves a good mystery, and this is no exception.  The location couldn’t be more inconspicuous.  The walls were only discovered in the 1980s when development started to take place in Bayers Lake.  Local resident Jack MacNab brought them to public attention and created some imagination-fueling videos.  Most people in Halifax have driven by it and been oblivious to its existence.  Development has encroached all around, leaving it as a peaceful, albeit mysterious nature oasis to explore amidst a bustling business park.

It has never been a high-profile location for urban explorers, possibly for good reason.  It is protected by the Nova Scotia Special Places Act which gives it some legal protection.  Thoughtless vandalism has occurred in the past, though today visitors should know that walking on the walls, or disturbing them in any way is strictly prohibited!  I have noticed trail cameras on previous visits.  As attention and awareness of this interesting slice of Halifax’s past have increased over the years, so has damage and encroaching development.  For an in-depth discussion on the Mystery Walls, listen to this episode from The Night Time Podcast.

The best time to visit the mystery walls as far as being able to navigate easily and to have the best views is when there’s no foliage.  As the leaves come out the trails get more overgrown, harder to see, and obscure the walls and other features.  This is definitely shin-scratching terrain, so long pants and/or leg gaiters are a must.  Since you’ll be in contact with plenty of brush, always do a good tick check.  There are a couple of spots that require a moderate climb, which adds to the fun but is not for everyone.  The rugged terrain requires proper hiking footwear for traction & stability.

Beyond the interesting mystery, this area is a pleasure to explore purely from a nature standpoint.  It’s topographically interesting, as well as being full of biodiversity.  In the warmer months, you’ll hear plenty of birds, especially near the wetland area, which is also home to carnivorous pitcher plants.

Deceptively, there is actually a lot to explore here.  Despite the small area, it is very easy to get lost with the network of overgrown trails leading in various directions.  It’s not suitable for novice explorers, as the deeper you go, the more likely you are to get completely turned around.  The worst-case scenario is that you emerge next to a highway with no idea how to get back to where you came from.  That being said, there is enough to warrant multiple visits to explore different areas with each visit.  Give yourself 2 hours to do a basic loop on your first visit, or as little as 20 minutes if you just want to visit the 5-sided structure.