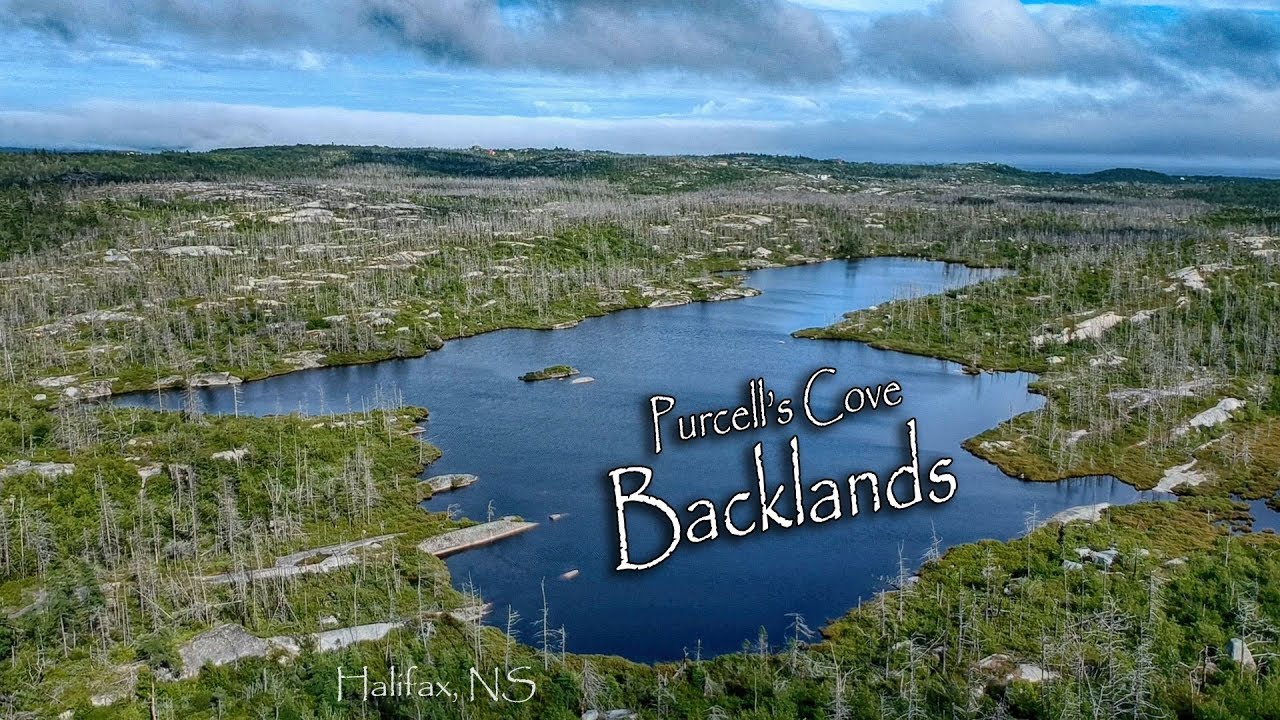 Exploring here requires navigation, ecological and land ownership considerations.  The Colpitt & Williams Lake area of the Backlands is now an officially designated urban wilderness park thanks to help from the Nature Conservancy of Canada.  Known as the Shaw Wilderness Park, it’s the largest, and one of few areas of the Backlands to be officially protected thus far. The unique landscape of the Backlands makes it extremely popular with mountain bikers (video) and hikers alike.  Proper trail etiquette should be observed.  Be on the lookout for others and move to the side of the trail to allow bikers to pass.  Navigating the area can be confusing.  Interconnecting paths, trails, and rock formations can lead you in many different directions.  Careful attention, proper planning and preparation are required to ensure you don’t venture beyond your means in this large wilderness area.

Volunteers with the McIntosh Run Watershed Association are helping to make the trails off of Alabaster way (Video) aka the McIntosh Run Trails more navigable with signage and proper trail construction.  They have also built great singletrack trails off of Norawarren Drive that now connect up to the backlands trails.  With all the amazing work they have done to make this a world-class mountain biking destination by forming a community of like-minded volunteers, they are deserving of your support.

This ecologically unique landscape is composed of glacially sculpted rock which was quarried from the mid-late 1700s through to the 20th century.  The stone was used to construct the early fortresses of Point Pleasant Park, York Redoubt, and the Halifax Citadel as well as the Town Clock and Grand Parade.

The quarry is still visible today via a very scenic hike from Purcell’s Cove Road.  “Queen’s Quarry” is a visually stunning landscape in itself.  The area is littered with huge piles of granite slabs, deep crevices, and rusting hints of its past.  This old industrial worksite has been reclaimed by nature for over half a century, making for some very interesting views.

This area was used to quarry the granite, dark sandstone, and slate used in almost all of Halifax’s oldest buildings.  One of Canada’s oldest railway tracks led down to the water where a pier was constructed to load onto barges for transport.  You can read more about this part of Halifax’s history in the book “Purcell’s Cove: The Little Place that Helped Build Halifax City” by Elsie Millington.

My favourite aspect of the quarry is an area that looks like a stage made of stone, complete with amphitheater acoustics (beware the decades of broken beer bottles).  The quarry itself is full of dangerous footing and is best enjoyed from a distance. (Video).

The remains of a WW2 anti-aircraft battery in the Shaw Wilderness Park portion of the Backlands also add to the historical narrative, tieing it into other militarily significant #historic sites like nearby York Redoubt, with centuries of bygone era fortifications. The open granite barren landscape makes for great visibility and open, sweeping vistas.  There are many high points like “Piggy’s Mountain” with views stretching many kilometers in all directions.  From some points, you’ll be able to see downtown Halifax, the harbour, open ocean, and encroaching housing developments from angles most Haligonians have never seen.

Vegetation is slowly filling in these open spaces, created after a devastating fire swept the area in 2009.  Fortunately, the Jack Pine and Broom Crowberry barrens are uniquely adapted to recurrent fires.  Another fascinating aspect among many, in the only landscape of its kind in Canada.

The area is a Mecca for migratory birds with more than 40 species confirmed breeding here.  A great  #bird-watching location, you’re likely to see Osprey gliding overhead as they keep tabs passers-by, of which some species aren’t seen anywhere else in Eastern Canada.  This important breeding area emphasizes the need to protect the ecosystem and treat it with respect.  Staying on well-used trails and not disturbing any vegetation are rules of thumb.

Aside from the array of birds, you may be lucky to see mammals not usually seen within city limits.  The increasingly rare and threatened Mainland Moose have even been spotted in this urban oasis.  A preferred destination for naturalists, the Backlands are full of unique flora and fauna (video). The McIntosh Run and Williams Lake watersheds are the backbone of the backlands.  Williams Lake is a cornerstone of the area and has long been a popular swimming spot.  It can also be explored via canoe/kayak (video).  A paddling loop at the opposite end of the backlands known as the Pine Island Ponds loop is a great trip for experienced adventurers.

There are many small lakes, ponds, and streams throughout the backlands.  Off of Purcells Cove Road is the unsuspectingly deep Purcell’s Pond, a great stopping point on the way to Queen’s Quarry.  Another favourite stopping point of mine is the aptly named Flat Lake.  Often smooth as glass, disturbed only by ducks, it’s a calm place to watch Osprey on the hunt.

The lands (unceded by the Mi’kmaq first nation) are under threat of development and surrounded by private land.  As such, it isn’t easy to identify access points that aren’t on private land.  The majority of the backlands are unprotected.  The exception is conservation land off of Purcell’s Cove Road donated by the Napier and Arnell families facilitated by the Nova Scotia Nature Trust, as well as the newly designated  Shaw Wilderness Park.

Many groups continue to work for the preservation of the entire backlands.  An activist group known as the Backlands Coalition has been advocating for many years.   In recent years Our HRM Alliance identified the backlands as an important part of the proposed H.R.M. Greenbelt.  Be sure to support these organizations if you share the feeling that this is a special area that should be protected.

Some gorgeous fall hiking photos from @HalifaxTrails, including a few from the Backlands! #keepthebacklandswild #backlandscoalition

Similar To The Halifax Backlands: